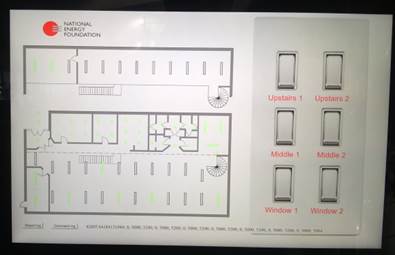 The controlled test period for the NEF building is now complete with the system saving 28 kWh per week – more than 50% - of the lighting energy use. With this period now complete, following development work on adaptive learning control mechanisms, the NEF trial has moved into its final phase.

To enable behaviour learning a virtual switch plate was developed specifically for the trial.

After a period of behaviour monitoring the system will set appropriate lighting set points and subsequently adapt to further occupant behaviour over the next month. The trial will demonstrate what further development could be incorporated into the next generation of ASSEMBLE system technology.

As of the 19th of August the main Costain temporary office building near Junction 34 of the M1 has been switched to ASSEMBLE system control. This marks the beginning of the final phase of the ASSEMBLE project at J34. Energy use and internal comfort conditions will continue to be monitored with results reported upon when obtained. Early indications suggest significant improvements on AC operation will be achieved through the control period.

Following the collaborative efforts of the University of Nottingham, the National Energy Foundation and TerOpta, a review paper assessing the state of the art of building energy management systems (BEMS), for small to medium-sized no-domestic buildings (SMSND), featuring power line carrier (PLC) has been published by the journal, Energy and Buildings. Significantly the paper identified opportunities for PLC in SMSND buildings where BEMS WiFi communication signals were insufficient. Further, the paper outlines a method for overcoming significant PLC limitations in the BEMS context.

The paper can be downloaded here.

The team is targeting publication of trial results when these are available.

With Terolight EM systems installed successfully and in monitoring mode at both Costain’s premises at M1 J34 and NEF’s main offices in Milton Keynes, the two systems are currently gathering data on the actual operation of the buildings HVAC and lighting systems.  Once this initial trial period has ended, the systems will be switched from uncontrolled (i.e. simply monitoring of what’s happening and how energy is being used) to controlled (i.e. where the different HVAC and lighting systems will be controlled by the Terolight EM systems themselves).

The early evidence of energy savings has already fed through to tangible and quantifiable reduction in energy consumption and preliminary in-depth analysis is showing significant cost saving benefits. 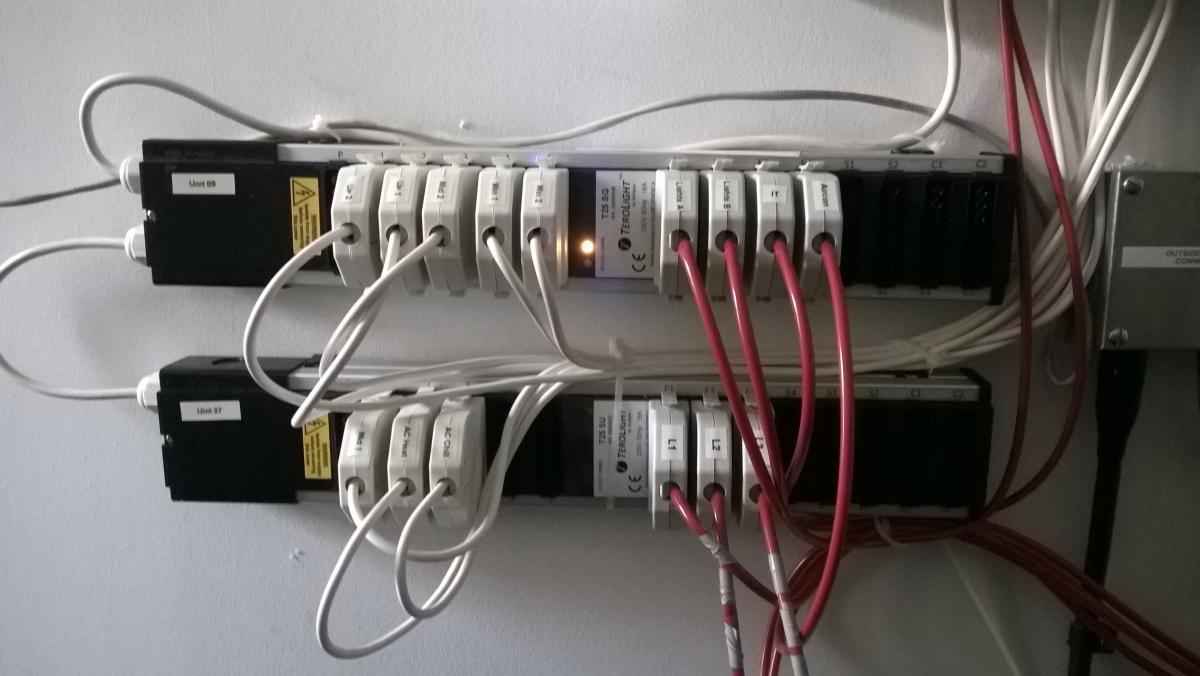 The latest phase of the ASSEMBLE project - to develop a low-cost and easy-to-install energy management system for small to medium sized non-domestic premises - is nearly complete.

The web-based Terolight EM system has been installed at the National Energy Foundation (NEF) for the second field trial, and  both project hardware and software have been successfully combined to enable the collection of energy monitoring and building data.

So far, the results are very encouraging, and NEF has identified significant energy saving opportunities. Looking beyond the current project, the consortium anticipates being able to commercialise Terolight EM and is set to make energy-saving benefits widely available across SME premises.

Installation of the ‘TeroLight EM’ building control and energy management system into the second ASSEMBLE project trial building is now nearing completion. But even when only part-installed the system was already operating and producing data that shows excellent cost and energy savings. Because TeroLight is modular in nature, parts of a building can be brought under control of the system and begin benefiting from an improved environment and energy savings even before the whole building is equipped. There is no need to wait for a completed installation and lengthy commissioning process before the benefits can be felt. The trial has generated plenty of interest, with other potential sites being identified for the next phase.

Following the successful installation of the ASSEMBLE system into Junction 34’s welfare block early evidence of significant energy savings are coming through. Progress continues with wider installation at Junction 34 underway and installation at the National Energy Foundation’s site in Milton Keynes due imminently.

In an exciting phase for the ASSEMBLE project, a major product trial of the ‘TeroLight EM’ energy management and building control system is about to begin. A large office block and an adjacent employee welfare block, belonging to Costain, one of the project partners, will be retro-fitted with the energy-reducing and cost-saving system. This Innovate UK supported R&D project also includes National Energy Foundation and University of Nottingham, whose knowledge is helping to optimise performance and analyse the results.

Mike Sharratt, CEO of TerOpta, will be presenting as part of the Innovate UK hosted stand at Ecobuild on Wednesday 4th March 2015. The session runs from 16:30 to 18:00 spotlighting funded projects from the "The Role of Controls and Energy Management Systems in Building Performance: Understanding, Optimising and New Developments" call. Come along to find out more about the T2ASSEMBLE system currently under development.

Costain, an ASSEMBLE Project partner, are holding a Sustainable Site Accommodation workshop session at their M1 Smart Motorway project in Derbyshire later this month. The session aims to enable the project team to create a more sustainable site accommodation.

14th November 2014: Teropta to present the ASSEMBLE project at EcoBuild

Mike Sharratt, project manager for the Innovate UK ASSEMBLE project will be presenting the project at EcoBuild 2015.

The ASSEMBLE project continues at pace following the first quarter review with Innovate UK monitoring officer. The major findings from the initial specification and design stage have earmarked the unique selling points, sketched the interactive GUI and outlined the hardware requirements. Moving into the second quarter further meetings between partners have been scheduled to identify test locations and the specific requirements of the system architecture for each site.

TerOpta wins "Future Energy Management" funding award from Technology Strategy Board. A consortium of companies led by TerOpta has been successful (subject to final grant offer conditions being met) in their bid to win funding as part of the "Future Energy Management for Buildings" collaborative R&D competition, organised by the UK’s innovation agency, the Technology Strategy Board. The programme aims to accelerate new commercially viable ways to reduce overall energy consumption in existing buildings through improved energy management. TerOpta's partners in the new project will be: construction and civil engineering company Costain Group plc; Monodraught Ltd‎ (a High Wycombe-based developer of natural lighting, ventilation and cooling products); the University of Nottingham and The National Energy Foundation (an independent charity, dedicated to improving the use of energy in buildings). The new project, expected to commence within the next few weeks, will be called "ASSEMBLE - Adaptive SystemS for Energy Management in Buildings with Low cost and Enhanced usability", and will use TerOpta's "TeroLight" intelligent lighting product as the basis for development into a full energy management system for small to medium-size commercial buildings.